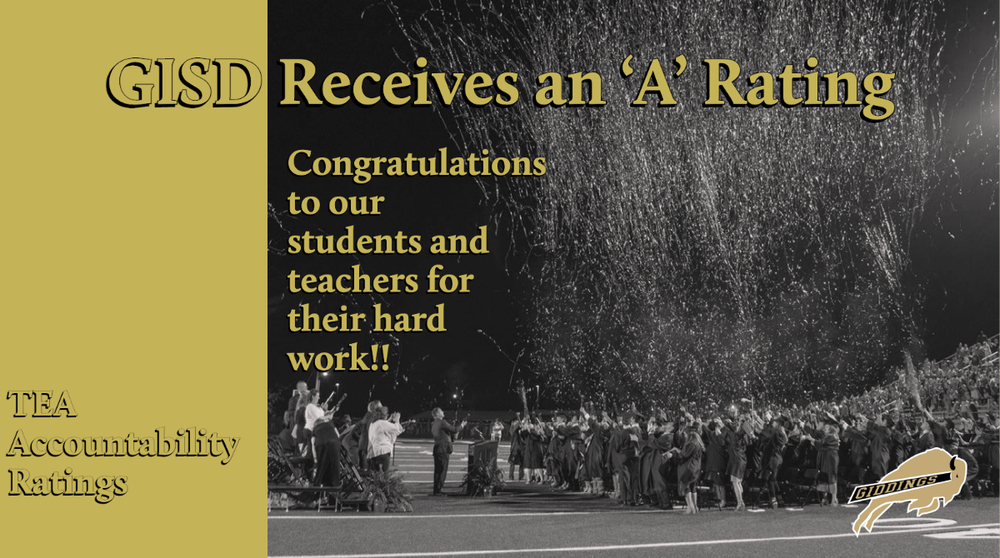 GISD Earns grade of ‘A’ in TEA Accountability Ratings

GISD Earns grade of ‘A’ in TEA Accountability Ratings

Giddings ISD earned an overall rating of ‘A’ in the TEA accountability ratings that were released on Monday. With an overall score of 90, GISD ranks in the top 30% of all districts in the state.

GISD Superintendent Roger Dees released the following statement on the ratings: “We are very proud of the performance of the district in achieving an A rating. However, in Giddings ISD we do not believe that the state accountability system is a complete measure of a school district or campus performance.”

“We do want to recognize the hard work of our students and staff,” said Dees. “A lot of work has gone into improving the academic achievement of our students. Many different assessments are used to measure progress throughout the school year. The STAAR test is just one of the assessments used. Our staff and students are to be commended for their efforts.”

The A through F system takes into account three major areas. They are STAAR performance; college, career and military readiness (CCMR); and graduation rate.

The Student Achievement Calculation scores were 84 in STAAR performance, 91 in CCMR, and 100 in Graduation rate. These categories are weighted, with STAAR and CCMR at 40% each of the total score, and the Graduation Rage at 20% of the total.

In the campus level ratings, GES, GIS, and GMS all received a score of B, while GHS received an A.

The 2018-2019 school year was the last year schools were rated as the school years 2019-20 and 2020-21 corresponded to COVID and all schools received a “Not Rated” score due to a Declared State of Disaster.

In 2018-2019, the high school, middle school, and intermediate school had received B ratings, so they have remained steady even with the severe loss of learning experienced by so many students during the COVID years. The elementary school, however, improved greatly, even through those difficult times, and improved from a D rating at a score of 61 to its current B rating with a score of 82.