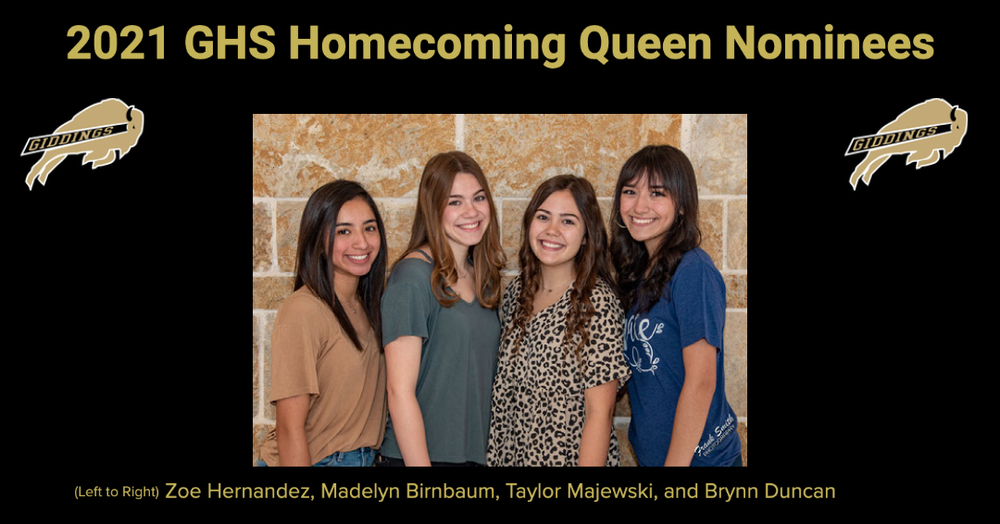 The Giddings High School 2021 Homecoming Queen nominees have been named this week.

Madelyn is the daughter of Randy and Laura Birnbaum. Madelyn plans on attending the Mays Business School at Texas A&M.

Brynn is the daughter of Anita Duncan. Brynn plans on attending Austin Community College for 2 years, then transferring to Texas State University to pursue a career as a dental hygienist.

Zoe is the daughter of Yesenia Montoya. She plans to attend Blinn College, the transfer to Texas State to pursue a career in physical therapy.

Taylor is the daughter of Neal and Kelly Majewski. Taylor plans on attending Texas A&M to pursue a career in special education.

The Homecoming Queen will be announced during halftime of the football game on Friday, Sept. 10, when the Buffaloes will host the Taylor Ducks at Buffalo Stadium. Kickoff is 7:30 pm.

Homecoming representatives for classes and clubs will be presented beginning at 7:00 pm, before the football game.

The representatives and their escorts are as follows: